Tag Archives: The Perks of Being a Wallflower

The Perks of Being a Wallflower

The Perks of Being a Wallflower by Stephen Chbosky

I have heard about his book for longer than I can remember.  Apparently it’s some kind of “cult classic” or something, I don’t know.  Truthfully the real reason I got this book is because the movie is coming out soon and I am very excited to see Emma Watson in a role other than Hermione.  I love her! And as I have said before, I have this problem where I have to read the book before I see the movie.  Anyway, I got this book from the library (love the library, I request a book and BAM it’s there in a few days and it’s FREE!) and read it pretty quickly.  It’s an epistolary novel, but written more like a diary.  The main character Charlie is writing to some unknown person about his life.  As you probably already guessed from the title, Charlie is a wallflower.  He is an introvert who is socially inept.  He is the youngest of three.  His older brother is the star football player who goes off to college on a full ride scholarship.  His sister is smart and beautiful and well liked at school.  And then there’s Charlie.  His only real friend William killed himself the year before.  Now he is starting high school with no friends.  He is determined to be more social this year and “participate” as his high school English teacher encourages.

I am still not sure if I liked this book.  It was interesting enough to finish.  And I might reread it.  Charlie is a typical introverted, awkward leading character.  He did remind me of a more innocent, nicer Holden from Catcher in the Rye and the author does refer to this character and this book.  He also reminds me of the main character from Almost Famous, William Miller. SoI had Patrick Fugit’s face in my head the whole book. 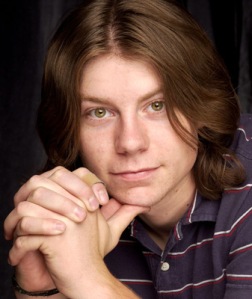 He was also in White Oleander which was a fantastic book and movie.   If he was younger I think he would have been a good actor for this part.

Charlie’s goal this year is to become more outgoing and make friends.  He quickly makes friends with Patrick and Sam and they bring him into their group.  They are all seniors while Charlie is a freshman.  They get him drunk, stoned, and hooked on cigarettes.  I didn’t really like all that.  And I was surprised that Charlie never seemed to have a curfew.  And while they are supposed to be such great friends of his, they often overlook him.  They don’t call him on this birthday.  And Charlie is a great friend to Sam and Patrick.

What Charlie is really supposed to learn from this group is that everyone is a little different.  We all have our idiosyncrasies.  His friends don’t teach him much, though, about how to be more outgoing.  He still simply reacts to what is happening around him, usually by doing what he thinks other people want him to do. Sam often tells him what he has done wrong, but provides little help on how to change. Charlie didn’t grow much as a character and now that all his friends have graduated, he will probably have a hard time during his sophomore year.  He does learn something rather important about his childhood in this book.  It’s something the author foreshadows from time to time.  But while this is a major revelation, it doesn’t change Charlie now that he knows.

I tell my students that sometimes the author reveals the theme by what the characters learn, and sometimes by what the characters are supposed to learn.  Maybe the theme of this book is shown by what Charlie is supposed to learn.  He is supposed to learn that he has good qualities that are valuable in a friend, that his wants are important and not just to follow what everyone else wants, that he needs to go after what is important to him.  I would love to have a friend like Charlie.  He is observant so he know people really well and he’ll help his friends in any way he can.  He just needs to be a little stronger and not be afraid to stand up for himself.

Tagged as book reviews, emma watson, patrick, stephen chbosky, The Perks of Being a Wallflower